I’ve read a lot of books since the last blog post but none have been Wild About Books worthy.  Last night I started a new book and within the first few paragraphs I knew that this would be the next book recommendation.  I can tell.  In just a few short paragraphs I can feel the rhythm, the flow, the connection between reader and writer.  I embrace the words. I embrace the story. It is right.

This instant connection also describes the relationship between my son Zach and my daughter-in-law Taylor.  I think the excitement and joy of their recent wedding week were not because of the wedding hoopla, but because we all knew from the very first paragraphs of their life together that this was right.  This couple has a rhythm, a flow, a connection that everyone delights in seeing.  This connection has extended itself into the two families.   We embrace each other.  We embrace the stories.  It is right. 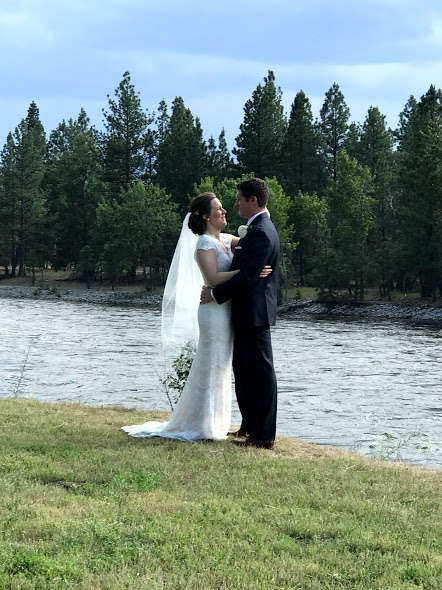 The wedding day started with morning yoga.  The ceremony started with guided meditation.  Maybe not your typical wedding, but by far the best wedding I’ve ever attended.

It was a family wedding.  Immediate family.  There were twenty of us including the photographer Dave, who became family almost as soon as he walked in the door.  Five grandparents, five parents, three sisters, two boyfriends of sisters, one aunt, one uncle, one groom, one bride and Dave.

The Aunt was the yoga teacher and officiant and unofficial photographer.  The mother of the groom (that was me) did a reading, which included a wedding joke (appropriate joke for those of you that know me and my tendencies).  The father of the bride did a reading.  The bride and groom wrote and read their own vows.  One kiss and done.

The day was fairy tale perfect.  The wedding was held at a five bedroom house 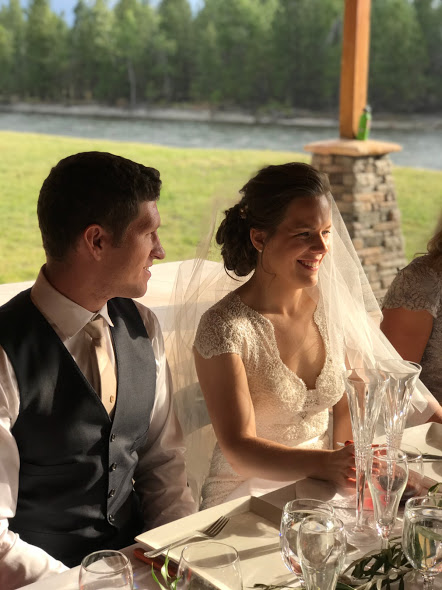 located on the Bitterroot River, isolated from any other houses, with views of the snow capped Bitterroot Mountain Range.  The rainy days of June let up on the wedding day allowing us to set up outside by the river.  The sun beamed on us in the morning as we did yoga in the lawn.  Soon after yoga the hair and makeup women showed up at the front door with bags of supplies to make us “pop” for the photos.  The men went to lunch at the local brewery while the women spent their day taking turns with hair and makeup. A makeup pause for  a champagne toast and gift opening as Louisiana grandma was heard saying while nodding her head “Uh uh….. Mawmaw knows what a man likes….” , 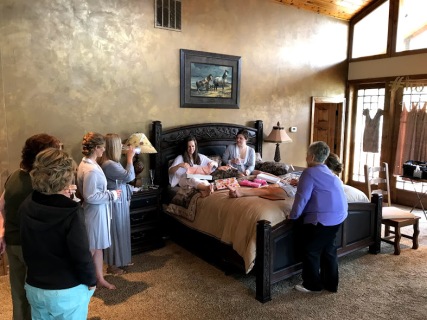 Mawmaw knows what a man likes

as the bride held up her new lingerie.  Mawmaw also commented after having her hair and makeup done, “Where’s Pawpaw? He’s not going to believe how beautiful I am.” as she strutted out of the room to find him.  The hair and makeup professionals had no idea that this was the women from both families in the room getting made up.  The atmosphere leaning to being just one close family.  The fairy tale wedding.

The men came back from the brewery; the groom secluded to the downstairs, the bride to the upstairs.  The rest of us shuttling items as needed.  There was no stress, the day was as relaxing as the morning yoga.  The bride, mother of the bride and sisters lounging on the bed in the make up room.  The groom, mother of the groom, and sister played pool downstairs.  The doorbell rang and the cake and cake decorator arrived.  A three tiered cake with the top tier being gluten and dairy free.  The door bell rang again as the caterer and her helper arrived to prepare dinner. The stealth like photographer quietly capturing the day for eternity.  Although it was just family, there was a wedding dress, bridesmaid dresses, a best sister dress, suits, super high heels (flip flops for me in case your were having a hard time picturing this).  You could feel a little anxiousness in the air as the time arrived for the wedding ceremony.  The officiant took charge, reading off the next person on the list to the groom as he escorted us to our seats.  Everyone in their place and the officiant welcomed us all, invited us to close our eyes and whether we knew it our not, guided us through some mindfulness meditation.  She melted the small amount of tension, eased everyone back to a safe and comfortable place.  Fluffing of the dress, presentation of the rings. The wedding ceremony proceeded as planned with the 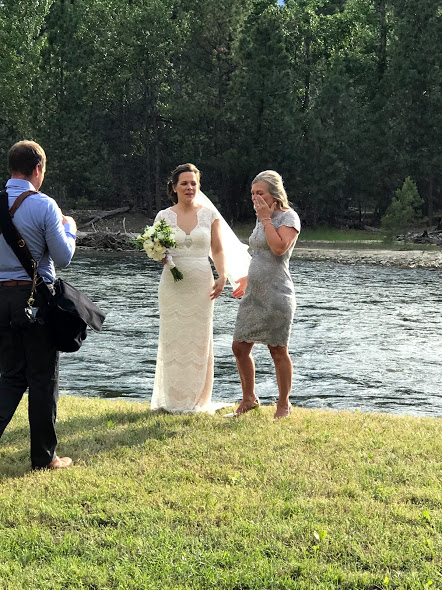 Where are my tissues?  Kevin!!!

river rushing by, everyone beaming with pride and joy as boxes of tissues surrounded the mother of the bride.  Tears of pride and joy could not be contained and flowed as steadily and predictably as the river.

Pictures, pictures, pictures.  Photographer Dave’s turn to take charge as he grouped us into appropriate or requested groups.  Once the photos were done we sat down at the outside patio for dinner.  Buffalo steaks, potatoes with garlic scapes, risotto with morel mushrooms and a huckleberry wedding cake.  A very Montana dinner was enjoyed by all; Montanans, Louisianans, North Carolinians.  A few toasts by the siblings and Mawmaw, who actually toasted the officiant for such a beautifully executed and heart felt ceremony. 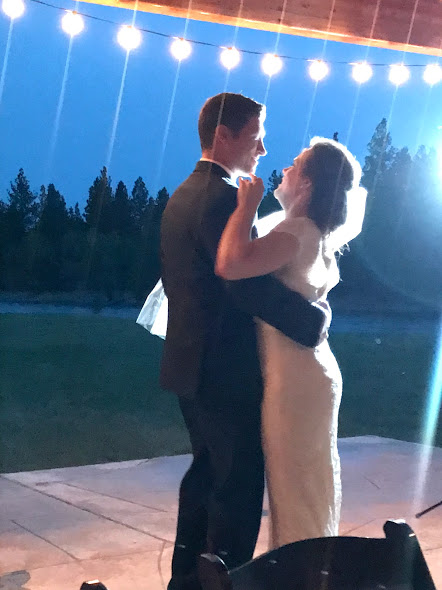 by The Old 97’s,  followed by the bride, father of the bride dancing to “Wonderful Tonight” by Eric Clapton and then the groom, mother of the groom dance.  My son Zach and I got up to dance.  At this moment we still had not picked out a song.  I put my hand on his shoulder.  He put his hand on my waist.  Our other hands clasped as we waited for whomever to pick out and start our song.  It started slow, but quickly we realized that this was a county song, a fast country song. “Honky Tonk Badonkadonk” by Trace Atkins.  Zach’s always said that one of the best college classes he ever took was social dancing.  We dropped our formal dancing stance as he took both of my hands and the impromptu

swing dance began.  We danced as if we had choreographed and practiced our groom, mother of the groom dance; right down to the end when Zach flipped me. The dance floor was wide open after that.  The party began.

Some of my favorite highlights of the week included;

Louisiana grandfather, Pawpaw packing tomatoes and cucumbers in his checked bag. “Not going to eat any of those store bought tomatoes”. 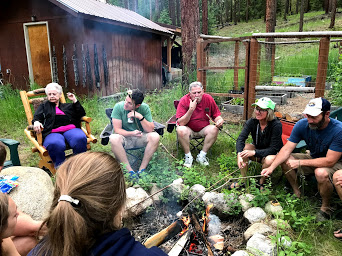 Mawmaw in the living room furniture

North Carolina Grandmother, Gennie Poe asking the father of the bride, Kevin if he could dance and them dancing on the deck to “Harper Valley PTA“, as Mawmaw and Pawpaw moved to the beat of one of their favorites.  Pawpaw telling everyone, “be sure and listen to the words, listen, listen to the words”.

The words of wisdom from Pawpaw, including “You’ll never get a corporate job if your name is VaGina”.

After the first time meeting; Pawpaw saying to Brett; “..who knew I could come all the way to Montana and meet a coon ass”.  As Father of the Bride, Kevin looks at me and quietly says, “..that’s a complement”.

This blog is for the Georgia Grandparents who were unable to attend.  I hope that my words and Meg’s pictures help to recreate the event for you. I’ve linked all of the songs so that you can click on them and listen.  We missed you. 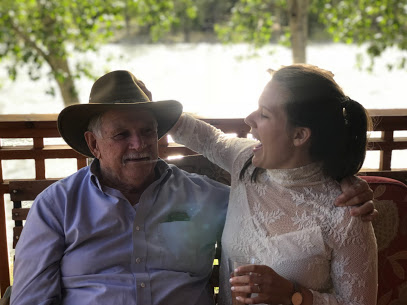 Pawpaw and the bride

Wait.  What about the book?  This is a blog that recommends great books.

The book selection is my favorite genre; memoir.  “Educated” by Tara Westover is a book that I just started and feel good about the start.  Take my word for it.  Call it reader’s intuition.  I’m not even going officially start it until I’m done reading a first draft manuscript from an up and coming New York City author, who just got married.

For more great book suggestions and other memorable adventures check out Wild About Books.

4 thoughts on “Wedding Week and a New Book Selection”