Once upon a time, not so long ago, in a not too distant place there lived a mountain bike princess. She spread love, peace and happiness in everything she did.  She was not your typical princess; most people 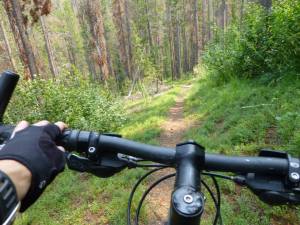 had no idea that she was a mountain bike princess.  She was simple and plain and genuine and sincere; certainly not a high maintenance princess as one would assume of all princesses. But, if you looked closely you could see that she had strong thighs and firm triceps and helmet hair.  She could swing an ax, knit beautiful scarfs, grow her own vegetables, and she liked to drink micro brews; especially at lunch.

Being a mountain bike princess did not come easy to her.  She had spent many hours learning to use her clip pedals in which her special shoes attached to her special pedals.  With a quick twist of the foot you are magically released from the pedal.  The learning curve for this quick twist was high for the mountain bike princess as she rode around in the grassy yard falling over and over and over still attached to the pedals and unable to put her foot on the ground to catch herself.  She laid on the ground looking up at the sky with her bike sandwiched between her legs when her two young children showed up, starring down on her.  They had a look of concern; the boy clinching his Mighty Morphined Power Rangers in his hands and the girl holding tightly onto her Bare Naked Barbies.

You knew it was a good day in the house of the Mountain Bike Princess when the Mighty Morphined Power Rangers and The Bare Naked Barbies were playing well together.  I asked my son one day what morphined meant.  He replied that that meant they didn’t have a mom or dad.  From that day forwarded we referred to them as the Mighty Orphaned Power Rangers.

The Bare Naked Barbies got their name simply from the fact that no one could get the clothes back on these inflexible dolls once they came off.  There was a basket of bare naked barbies to choose from and a wide assortment of clothing that was never worn.  One of the barbies had attachable wings.  These wings could be dipped into bubble solution and then you would wave the barbie around in the air and the bubbles would fill the world as only bubbles can do.  Shortly after the purchase of bubble barbie, she not only lost her clothes but she lost her wings as well.  With the six holes in her back for attaching the wings she became know as Bare Naked Buckshot Barbie.

As the children looked upon their mother lying in the grass after falling on her mountain bike, the boy asked; “Mom. Don’t you ever cry?”

The mom looked into her children’s eyes and told them no; for she was the Mountain Bike Princess.  The children gasped in amazement.  They knew that their mom was magical but had never dreamed that their

mom was The Mountain Bike Princess.  They knew from this day forward that they would now be held to a higher standard than most children and they never faltered from this expectation.

The Mountain Bike Princess had few enemies and mostly, people were true and good to her and her children.  She did have to protect them from one bad witch who tried to lure them into her evil lair with Barbies and Nintendo, with cases of coca cola and buckets of thin mints.  But, the children were smart.  They were cautious.  They knew that love came from the heart and not from Costco.  Eventually as the children got older the evil witch left them alone.  The evil witch did manage, in her resentful, retaliatory ways, to steal their father from them.  It was unfortunate as he was a good father.  But that’s another story.

One thought on “The Mountain Bike Princess”