The book of the month for November 2016 is written by a friend of mine.  Jon Turk; one of the West Fork Hippies,  living on the West Fork of the Bitterroot River. He’s a 70-year-old skier, mountain biker, kayaker, writer and extreme adventurer residing in Darby, Montana, and wintering in Fernie, B.C.   His newest book came out in September and I’ve just started reading it.  My sister was in town when we went to his book reading in Hamilton at Chapter One bookstore. Meg bought two books, one for me and one for her and we had Jon autograph them.  I had to wait for Brett to finish our copy and I believe that this wait was one of those universe controlling events that will make you believe that there is a plan and life is not just random happenings.

Reading this book after the presidential election was the way my life was meant to play out.  I’ve always believed that books seek you out depending on what you are in need of at the time.  If you start a book and it’s not doing anything for you, put it down.  You and that book are not in need of each other.  You will know when you are reading a book at the right time; you can’t put it down.  Life is too short to push yourself through a book.  I tried that with “Atlas Shrugged”, I should have quit after the first 50 pages.

The November 2016 Book of the Month is “Crocodiles and Ice” by Jon Turk.  An adventure book, a life book, a plea for compassion for the earth book. 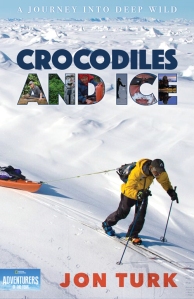 I’ve been to several speaking engagements of Jon’s and he always recites a quote from an elder woman he met in Siberia named Marina.

“If you lose the magic in your life, you lose your power”.

This quote always resonates through my soul and periodically re-emerges into my brain as I try to solve the relevance of this wisdom in my life.   What is the magic?  What is the power?

My sister often says that her goal is to make magic. As a yoga instructor and wellness coach, she is making magic by transforming people’s lives into something they didn’t think was possible.  I describe certain activities as magical.  Moonlight cross country skiing is magical.  All sound is absorbed in the snow so it’s quieter than quiet. The moonlight shining on the snow makes it appear as if you are skiing on fine diamonds.  Magical.  Mountain biking the single track trail on the north side of Lake Como is magical; it’s downhill on the way in and downhill on the way out. Magical.  So how does that magic give us power?

Here’s a story to help explain my interpretation.

Several years ago, I drove to Eureka, Montana on a Friday afternoon to watch my son play a high school football game.  It’s a four and a half hour drive to Eureka, located on the Canadian border.  Nine hours of driving to watch a two-hour football game.  A game in which the Eureka team put in their third string due to the pounding they were handing the Darby Tigers. This is what I do.

As I arrived in Eureka, I stopped to top off my gas tank and go to the bathroom.  Then I headed to the high school and walked up to the ticket booth.  While I was waiting my turn to pay I put my hand in my pocket to pull out the cash I had brought for the night.  It was gone.  I checked the other pocket.  Checked my jacket pockets.  Attending this football game was already a challenge to my income and losing the cash was not helping one bit.  I went to the car.  Looked in the seat, checked the ground just outside the door.  I looked under the seats.  Then I back-tracked in my head where I had been.  I drove back to the gas station, walked up to the cashiers counter and said;

“I think I lost some cash in your bathroom a little while ago, it was like….eighty-six dollars….”

The cashier reached behind her, then put her hand out towards me and said,

“Nope….Ninety-two dollars,” as she handed me my money.

“Now we run smack-dab-head-on into that fuzzy line between logic and magic, coincidence and synchronicity.  And ultimately, it’s not a matter of fact versus fiction; it’s about how you choose to view the world – or perhaps more appropriately – how you choose to feel or to communicate with the world around you.” 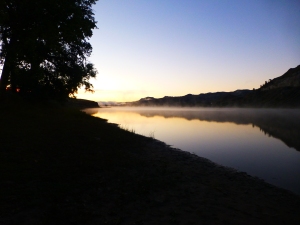 The magic is believing that the events in your life will work out the way they are supposed to .  You have to believe it or you’ll get too cranky to be around. There’s no power in cranky.  There is no power with anger and hate.  The power comes with optimism and hope.

I had just started Jon’s book and  had to get up and grab a highlighter.  A highlighter worthy book.  Meaning you will review parts of the book or loan it out and want others to read deeper into  the bright yellow passages because they are that good.  Or…. you want to use these highlighted passages on your blog post.

“Humanity is in dire need of a ‘Consciousness Revolution’ before we can move into the 21st century with a reasonable hope of creating a peaceful, healthy and equitable world.”

Jon’s style of writing is one of my favorites.  Pulling you in with exciting and life-threatening extreme adventures in remote corners of the world and then when you least expect it, a mix of philosophical input and scientific fact on the future of our earth and it’s custodians.

“Anyone who advocates ‘turning the clock back’ and reversing the course back to ‘the way it was’ belongs on the dismissible delusional fringe.”

Check out Jon Turk’s website for more books, future reading engagements and a link to his TEDx talk.  If you are in New York City on November 18th he’ll be at The Open Center on 30th and Madison at 7:00 pm.  Or if you just want to ride mountain bikes with the West Fork hippies, give me a call, I’ll hook you up.

You can find more great book recommendations and my own adventure writing at Wild About Books.

“If you lose the magic in your life, you lose your power”