“Sing Unburied Sing” by Jesmyn Ward is an excellent book.  There are engaging characters that you will love. Meth addict parents who you will hate.  Poverty, racism, survivors.  And ghosts.  Spirits who are stuck in the restless spirit world due to a senseless unresolved death.

The boy in the book sees them. 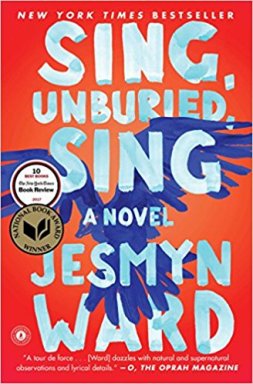 The grandparents are raising the children in this book.  The mother shows up when she needs a roof over her head or a meal.  The older child calls his mother by her first name.  He knows she leaves them for days to get high.  He takes care of his toddler sister.  Their other grandparents do not acknowledge the children’s existence.   The other grandparents are white.  The father is in prison.  The black grandfather is the hero.  But many times his hands are tied.  His daughter takes his grandchildren.  He tries to talk her out of it.

“My grandfather hugged us even when we weren’t in the same room.”

“Your mother is missing the maternal gene.”

This book is a novel.  I just watched a segment on 60 Minutes about grandparents that raise their grandchildren because the parents are addicted to meth or opioids or heroine or alcohol.  The older children took care of the younger children until the grandparents stepped in.  What about the children that don’t have this life ring thrown out to them?  Where are they?  What are they eating? The segment takes place in the healthiest state in America,  Utah. What is it like in the least healthiest state?  We talk about the opioid epidemic but what about the children? Whose taking care of the children?

As long as I can remember I wanted to be a mom.  At first I wanted 9 kids so that I could have my own baseball team.  Then I wanted 5 kids.  Once the diapers were done, I decided that two kids was perfect  I had the energy for two kids.  I was a devoted, selfless, engaged mom.  I can not imagine having children and them not being the center of your world.  Feed, clothe, teach, read to, clean up after, listen to, throw the football/softball with, laugh, yell, cry.  Hard core mother instinct.   I hope my children feel me hugging them even when they are not in the room.

One thought on “A Mother’s Day Book Recommendation”