You’ve been wondering where I’ve been as you wander aimlessly through the shelves of the library or scan the books recommend to you by Amazon based on your purchasing history or peruse the book table at Costco before going to buy the items on your list.   Perhaps you’ve reread the Wild About Books blogs and caught up on your reading.  Or maybe you’ve noticed the new tab on the website that lists all of the Wild About Books books in one convenient location.

Now it is summer.  Time to take that cold beverage and a good book to the deck, to the beach, on the river or in the air-conditioned living room on the recliner.  Either way, it’s time for some reading material from your favorite source.

1.  Born a Crime by Trevor Noah.  A memoir of Comedy Central’s Daily Show host Trevor Noah who was born and raised in South Africa.  There are some slow parts, but you should persevere through them and enjoy the crazy ending.

2.  Ordinary Grace By William Kent Kruger.  A novel that is a page turner, each chapter leaving you saying “one more chapter then I’ll go to bed”.  Lots of good characters and a few murders to be solved.

3.  A Gentleman in Moscow by Amor Towles.  A truly brilliant novel whose characters will still be in your life long after you’ve finished the book.

4.  News of the World by Paulette Jiles.  A quick easy novel and an unusual plot.

5.  Short Nights of the Shadow Catcher The Epic and Immortal Photographs of Edward Curtis by Timothy Egan.  A true story of turn of the 19th-century photographer Edward Curtis and his attempts at creating an encyclopedia of every American Indian Tribe.

6.  LaRose by Louise Erdrich.  A novel full of intertwined characters and American Indian dreams and spirits.

7.  Cutting for Stone by Abraham Verghese.  This is one of the best books I’ve ever read.  I highly recommend it.  I read this before the birth of Wild About Books and have never had a chance to recommend it.  It’s a book that you should add to your “books to read before you die” list.

That should get you through the summer and then some.

So…..who is Mrs. Ecstasy Cubed and why is she retiring? 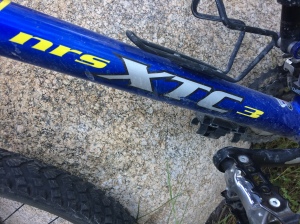 Many years ago, before cell phones and candy crush, there lived a mountain bike princess.  She traveled to far away lands crossing borders with her passport tucked into the leg of her spandex bike shorts, hauling her camping gear loaded in a bike trailer, riding with friends through relationship and child rearing debacles.  All of the mountain bike princesses adventures were upon her trustee companion Mrs. Ecstasy Cubed.  A small Giant.  A full suspension mountain bike.  A partner in adventure, riding perfectly positioned between her legs for miles and miles, climbing and descending tens of thousands of feet in elevation.

Mrs. Ecstasy Cubed is seventeen years old, which is ninety-four in bike years.  Bicycle technology has moved at an alarming pace, but Mrs. Ecstasy Cubed has held her own. She had to have her pedals upgraded twice, her chain replaced multiple times, her saddle traded for a cushier model, bar ends added and an unaccountable number of tubes installed.  She should have been replaced many years ago, but the mountain bike princess could not bring herself to part with her old friend.

There was the ten day bike tour on the Continental Divide Trail, in which Mrs. Ecstasy Cubed and the mountain bike princess won the award for successfully leading five men and one woman through the heart of grizzly bear country while menstruating.

There was the time while riding Coyote Coulee, Mrs. Ecstasy Cubed misjudged the spacing between a rock and a tree root while climbing on a side hill and they both went over, head first, down the side of the mountain.  When they finally came to a stop the mountain bike princess had come off of the bike but her shoes were still clipped to the pedals of Mrs. Ecstasy Cubed.

On another ride, the mountain bike princess and Mrs. Ecstasy Cubed were with friends riding Overwhich falls.  After several hours of joyously riding on the single track, they realized that they had no idea where they were.  Luckily, they ran into a hunter and asked him to show them on their map where they were.  The hunter said he was from Pennsylvania and all he knew was that they were in Idaho, which was more than the cyclist knew, as they thought they were still in Montana.  It was dinner time and the tired cyclists were in the wrong state.  The hunter gave them his headlamp and a flannel shirt and pointed them in the direction that he had come from as he headed back to his camp.  The three bike riders split an orange for dinner and headed out on another trail.  It was too dark to ride so they walked the bikes, wading through creek crossings as the night got darker.  Around 9:00 they found themselves on highway 93 just north of Gibbonsville, basically in the middle of nowhere.  Eventually, they flagged down a camper who didn’t have room for them and their bikes.  He took their phone numbers and promised to call for someone to come get them.  He called the sheriff’s office and gave their phone numbers to the sheriff.  The Idaho sheriff called the Montana sheriff and by midnight, as they sat by a fire warming their cold wet feet, help arrived and they were driven home four abreast in the front seat of a pick-up truck.  Mrs. Ecstasy Cubed was not happy about being beaten up by rocks and drug through cold creeks and then thrown into the back of the pickup truck banging against the other bikes, but she was not one to complain.

Mrs. Ecstasy Cubed is still around, she’s even been loaned out and is going to Bend, Oregon next week.  But she has been replaced.  Replaced by Chipsyn. 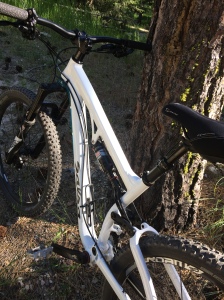 brakes and she’s a single track whore.  Riding up the road and then down the trail is not an option, she wants to ride up the trail as well.  She heads towards rocks and rolls up and over.  She has confidence and finesse and a lack of fear.  Where Mrs. Ecstasy Cubed would freak out and pitch the mountain bike princess cleanly down a mountain, Chipsyn smoothly executes each obstacle as the true professional that she is.  She’s mature and smart and takes the mountain bike princess to the next level.  It was time.