Just finished Hillbilly Elegy.  It’s been on my radar for quite some time but I could not bring myself to pay the new book price for it.  Then, as luck would have it, my “book bub” post that I subscribe to had it listed as a bargain book.  I was able to download it on my Kindle for $4.99.  It was meant to be read at this time. 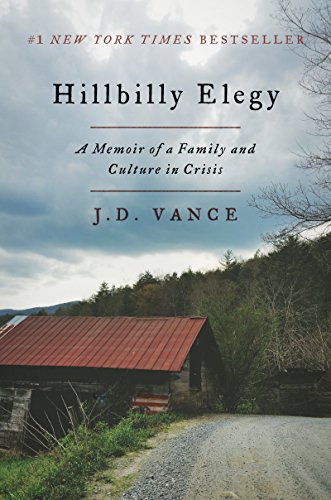 While I was reading, I kept feeling as if I were reading about the deep south in the sixties and seventies.  But no, the author of this book was born in 1983 and grew up in Ohio.

I also realized while reading about this author, that many of the stories he was telling are happening every day in the lives of many of the students that attend the school where I work.  This is a book about poverty.  A vicious cycle with few positive role models, few options and mostly a life course in daily survival.

For several years I had a student at the school that I was paired up with to mentor.  She came to visit me in my office.  Sometimes she brought friends, sometimes it was just her.  She was in fifth grade when we started meeting.  She had a younger brother and sister and was responsible for getting them up and walking them to school.  She managed to get them all to school before the late bell, but they rarely got there in time for breakfast.  All three of them would start their day on an empty stomach.

I asked her once what they had had for dinner the night before.  She said her mom wasn’t home and so she made Top Raman for her and her siblings.  I was impressed and asked her if she was comfortable turning on the stove and boiling water.  She looked at me funny and said, “you cook Top Ramen?”

The school has since implemented a breakfast after the bell program and is free to all students.

My mentee student dropped out of school and had a baby at fifteen, just like her mother and her mother’s mother. Generational poverty.  Almost impossible to overcome.  This student just turned her grandmother into a great grandmother while still in her late forties.  Last time I saw this student she was grudgingly carrying her son and living with her estranged baby’s father at his step father’s house.  This story is right on par with Hillbilly Elegy.

This past spring I was coaching Junior High tennis.  I had a sixth grader who was new to the sport.  He picked it up very well, had good hand eye coordination, understood that when a bouncing ball was coming towards you to back up and not run forwards as most Junior High tennis players do, over and over as the ball bounces over their heads every time.

We were on the bus to an away match.  I knew that this boy didn’t live with his mother or father.  That he lived with a friend of the family.

I asked him, “Where does your mom live?”

I don’t know much of this kid’s story.  But he and the other student I mentored began their lives far behind the starting line, with little chance of catching up and more likely to continue a cycle of poverty, crime, substance abuse, partner abuse and living on public assistance.

We have advertised several positions at our school.  Cook, classroom aide and a janitor with very few applicants.  We’ve found that people have better benefits without a job than with it.

Hillbilly Elegy asks what is the answer?  How do we break out of this cycle? Having giving trees, coat drives, free/reduced lunches are not helping, they seem to be enabling.  They are expected.  We have such a high percentage of students on the food stamp program, that the state allows us to just go ahead and feed all the kids in elementary for free.

The book says there needs to be a supportive adult role model in a child’s life.  But how do you guarantee that?  How can you have a mother reading every night to her children when she can’t read?  How do you have a father reading out spelling words before spelling test day when he’s out of the picture and fathering and abandoning more children?

Hillbilly Elegy doesn’t give answers but it does open your eyes and hopefully, opens the conversation for a solution or to maybe get off of our high horse as a nation and look to some countries who have figured this out.   I highly recommend this book.